Why was a hockey ball called sinaasappel?

Talking about cow dung, 💩 one can think of its several uses since centuries for heating, cooking and fire. An Ahmedabad citizen covering her car with cow dung to tackle the scorching sun was also doing the rounds this year. But could we think of a human skull in the form of a hockey ball played in the ancient times or a hockey ball made of cork and horsehair and the first puck being made of frozen cow dung? Or probably forgetting the truly earned prestigious Stanley Cup🏆 on the roadside and also eating cereals from the same? 🥣 Well not only your cereals, the winning team is also allowed to eat ice cream, 🍨 have a nice soup or anything else from the trophy. 😵 Well, well, well, these are some unknown intriguing facts about hockey.🏒

India and The Netherlands, both being agricultural countries, not only share a close bond in business, but also in Sports. 🏊‍♂️🏌️‍♀️🏇

Though the loss of Oranjeleeuwinnen (orange lioness literally) in the current Football World Cup has left a lot of fans disheartened, but the Dutch are known to be doorzetters (go-getters). Voetbal ⚽ is one of the most popular sports in the country, but not to forget hockey too 🏑 that happens to be a popular sport of India as well.

From Bandy to ice-hockey and now field hockey, this sport was popular amongst the Brits and in India; under the name of khilo khundi in Punjab. 😋It was first introduced in The Netherlands by Pim Mulier in 1891 with Haarlem paving the way for a historic location, because this is where it was first played in The Netherlands. Hockey Summer Olympics was hosted for the first time in Antwerp, Belgium in 1920. The Netherlands entered into the world of field hockey in 1928 Summer Olympics and with the event being hosted in Amsterdam for the first time, India and The Netherlands had their first face-off. India (then under the British rule) was a consistent winner of hockey Olympics, with The Netherlands ranking second in 1928. 🥈Only in 1948 did India win the gold medal as an independent nation. 🥇

The Netherlands played this sport with different rules. 🧐 The stick had two flat sides; hence, a player could use both the sides to dribble. The ball was made of gevlochten touw (braided rope/string) 🏐 and canvas,  thereby making it lighter and bigger. 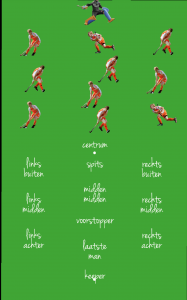 The colour and shape resembled the fruit sinaasappel (orange), 🍊thereby earning the name. The players were allowed to stop the ball with their foot; now that is a little difficult to digest coming to think of hockey. 😢But to qualify for international matches, the Dutch hockey rules were changed.